The last episode of Burn Notice airs tonight. After tonight there will be no new opportunities for Sam Axe to charm soulless psychopaths with his alter ego Chuck Finley. We will never again marvel anew at the ability of Fiona to blow up entire blocks of warehouses on the Miami River without anyone even batting an eye. Michael Westen, long-abandoned burned spy, won’t be there to save the little guy from the big bad wolf or break our hearts with his loneliness. He will exist only in reruns. There won’t be anything new under the clear, South Florida sun.

Miami was the one character on Burn Notice that I could always count on. Each episode was a glossy postcard from the city I call home, despite the fact that I haven’t lived there full-time for many years. Coconut Grove looked luxurious and exotic. The Keys held close to their wild mystery. The blue waters of Biscayne Bay rivaled those of any advertisement for a Caribbean getaway that might have played during a commercial break. The Marina at Dinner Key reminded me that the best boats are those owned by your friends who invite you to come along.

Where Miami Vice was dark and broody, Burn Notice, at its best, is bright and buoyant. Crockett and Tubbs lived in the shadows of after hours clubs and the glare of pink neon. Michael, Sam, Fiona, and Jesse operate in the crystal clear light of day. Burn Notice always felt like Robin Hood and his band of Merry Men. If, after robbing the rich to feed the poor, Robin Hood and the Merry Men had gone for tapas and mojitos.

Burn Notice wasn’t always perfect. The times when it lost its way were exactly those times when the mood got too dark, the setting too remote, the mosquitoes too nasty. Fortunately, they always found their way back to South Beach, Key Biscayne, and Coral Gables. Sam was there to mix a rum drink and Michael took the Charger out for a yogurt run. Through it all, Michael and the gang looked great, did good, and taught us all some useful tips on modern spy craft.

There’s another reason Burn Notice means so much to me. When I was traveling (a lot) for work, I read (a lot) of books that were readily available at the airport. Lucky for me, that included the Burn Notice serials by Tod Goldberg. Little did I realize that a few years later, I would get a call from that very same Tod Goldberg telling me I had been accepted into the MFA program he runs at UCR-Palm Desert. Being a part of this program has changed my life in all of the best ways. Burn Notice doesn’t get the credit for that—I do—but I’ll never forget the breadcrumbs on the trail that led me to where I am today.

I’ll watch the final episode tonight. I’m sure I’ll cry, because I always do. But anytime it’s snowing and I’m feeling homesick, I know exactly where to turn. 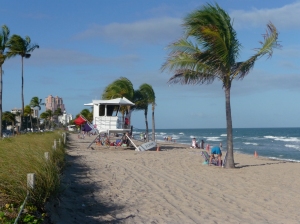