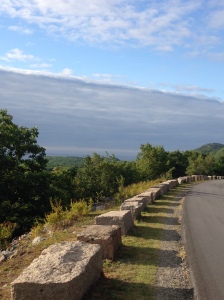 Enigma (noun) : a person or thing that is mysterious, puzzling, or difficult to understand.

My love for our National Parks is an enigma. My own backyard, which is admittedly lovely, is saturated with Tiger mosquitoes and nasty ticks this time of year. My natural walking speed is somewhere between stroll and mosey. If you ever see me running, send help, because I’m being chased.

But when I’m in one of the National Parks—even one that has mosquitoes and ticks—I become a person with durable wool socks, Helly Hansen hiking shoes, and Deep Woods Off.

My phone stays in my pocket because, even if I have cell service, I don’t want it. I stop to look at meandering brooks or tiny fish darting in and out of the long grasses on the shoreline. I’ll sometimes sit on a rock that is not necessarily suitable for sitting but perfectly suitable for thinking.

I gaze on scenic vistas and imagine how it must have been for people a hundred, two hundred, or three hundred years before to, like me, experience mountains so tall their summits are hidden by the clouds themselves, or see ancient echoes of glaciers, or stand in an seemingly endless deserts for the first time. I feel closer to the writings of Muir and Thoreau.

I have had the outstanding good fortune to visit many of our National Parks. I often say I am one of the few people to have visited the Dry Tortugas, home to a Civil War fort two hours by boat off the coast of Key West, and Denali National Park, home of Mt. McKinley a little more than two hours drive north of Anchorage. (This declaration, of course, is based on no actual data whatsoever, other than my own NPS humblebrag.)

I have seen the Joshua Trees in the California desert and the giant redwoods of Sequoia in the California mountains. I have listened for the ghosts of the Founding Fathers at Independence National Park in Philadelphia, PA, and read love letters between John and Abigail Adams in Quincy, MA. 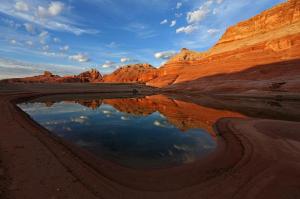 The cliff dwellings at Mesa Verde are miraculous and ancient. It is no mystery to me why the colorful slot canyons of Lake Powell in Arizona are so often used by filmmakers as a stand in for Mars. (Watch some of Taylor Kitsch in John Carter if you want to check it out. Don’t watch the whole thing. There are way better things you could do with your time, like watching Taylor Kitsch in Friday Night Lights.)

It is without hyperbole or exaggeration that I can say that Zion in Utah is literally one of the most beautiful places on earth.

Recently, I visited Acadia National Park in Downeast Maine for the first time. My most excellent guidebook, Acadia: The Complete Guide, by the most excellent James Kaiser (who also has a great guidebook for Joshua Tree) referred to Acadia as “posh” amongst its National Park peers. And that’s true. As National Parks go, Acadia is privileged in both time and place. It grew from the tireless work of two wealthy Bar Harbor cottagers and has benefitted greatly from the generosity of John D. Rockefeller, Jr., and now his son David. We happened to pass David Rockefeller on our trip along one of his father’s carriage roads. It isn’t every day that you see a scion of one of America’s wealthiest families doing exactly what you’re doing: enjoying the clear air and the beauty of the Maine coast on a late summer afternoon. Especially considering that David Rockefeller is nearly a century old. But there he was. And there we were. It was strange and comforting all at once.

I love, without reservation or qualification or even a whiff of irony, our National Parks. I am thankful for the men and women who work the keep them open and accessible. I am thankful for people like Muir and May Mann Jennings and the other early conservationists, scientists, and advocates that made these parks possible.

I am thankful for interpretive guides, short information films, dioramas in visitors’ centers, and detailed topographical maps. I am thankful for Ken Burns’ The National Parks: America’s Best Idea.

I learned early on the park cliche to leave only footprints and take only pictures. I unabashedly take much more than pictures. I take with me the peace, grace, and power of the world around us. I take stock of our collective history, my personal present, and our uncertain future.

“Thousands of tired, nerve-shaken, over-civilized people are beginning to find out that going to the mountains is going home; that wildness is a necessity; and that mountain parks and reservations are useful not only as fountains of timber and irrigating rivers, but as fountains of life. Awakening from the stupefying effects of the vice of over-industry and the deadly apathy of luxury, they are trying as best they can to mix and enrich their own little ongoings with those of Nature, and to get rid of rust and disease.” 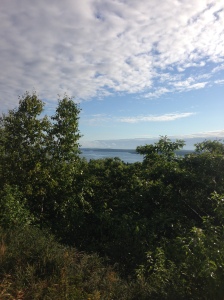