I went into Barnes & Noble this morning for no particular reason.

Elite athletes engage in pre-visualization before they compete. Me? I engage in pre-rationalization before I go into a bookstore. “You could buy that non-fiction book. The one about China that won the National Book Award last night. It must be good. And no one should feel guilty about buying that book. Understanding China is super important,” I said to myself. “Or maybe that short story collection.” I don’t read short story collections, so buying one couldn’t possibly be self-indulgent.

If you pre-rationalize, you are always ready with an excuse (or excuses) for the book (books) leaving the store with you.

Using my advanced pre-rationalization skills, I was able to walk right past the Build Your Own Darth Vader kit and the book about knot tying that comes with its own length of sturdy white rope—both of which could make for a bitchin’ Saturday afternoon. Or ‘gifts’: pre-rationalization code for things I buy for other people but end up deciding to keep for myself (or read before I give it to them.)

Turns out, I couldn’t remember the name of the China book and I didn’t feel like asking. (It’s Age of Ambition: Chasing Fortune, Truth, & Faith in the New China, by the way.) I couldn’t work up any excitement for the short story collection. So I went to the magazine section.

Have you been to the magazine section of the bookstore lately? I hadn’t. The racks are overflowing with weird and oddly-specific publications. Everywhere I turned I kept hearing Jerry Seinfeld in my head asking “What’s the deal with that?” 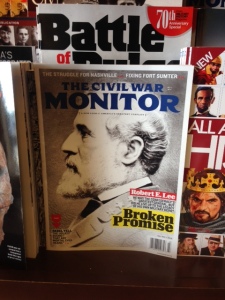 Better keep an eye on that Robert E. Lee

The Civil War Monitor. What are you monitoring? Seems that one is pretty much done and dusted, even for me, and I’m from the South.

How about the new-agey health/yoga/meditation section? Three magazines had cover stories about 10% Happier, Dan Harris’s excellent book about how meditation has transformed his life. They seem to be about 100% happier that someone in the main stream media—someone who is ON TV—will be in their magazine. Sting and Trudie can only be on the cover so often, I guess.

Also, in the health section, behind the Dr. Oz magazine with the headline that read something like Eat Anything You Want – Even Cake! was a particularly ironic rack where the WeightWatchers magazine was placed right next to something called livehappy. Take it from me, those two DO NOT go together. (In the picture, you’ll catch a glimpse of What Doctors Don’t Tell You. I DID NOT open that. My active imagination keeps me up at night without visual aides, thank you very much.)

There was actually a magazine called List It! At $9.99 it includes such compelling material as Top Ten Fictional Animals and, as you can see from the cover, 6 Things Taylor Swift Always Has In Her Fridge. (Side note: Does anyone remember The Book of Lists? I remember it being in lots of people’s bathrooms in the 80s.) My best guess is this magazine is for people who would read BuzzFeed all day but don’t have the internet. This is really sad for them. How will they know which Lord of The Rings character they are? (Samwise) Or what city they should actually live in? (London) Is there a magazine called Quiz Yourself!?

There were special issues about Star Wars and The Hunger Games and even a Rolling Stone all about Tom Petty. There were breathtaking design magazines and magazines for songwriters and quilters and knitters and woodworkers. And Dog Fancy and Cat Fancy and People where the “Fancy” is silent.

I drooled over many food magazines, including the amazing Lucky Peach, which had cartoons of lobster rolls. There are snapshots from vacations I will never take in AFAR’s “Not Your Typical Islands” issue and thoughtful articles I will never read in The Economist.

The magazines blew my mind. So many stories, so many pictures, so many words.

I didn’t buy any. I couldn’t decide. Next time I’ll have to prepare: “It is important to know how to cook chicken five different ways in under twenty minutes. Everyone has to eat.” Or “I read Dan Harris’s book. But if I don’t read this article about his book I might be able to be 11% happier. That one percent could make all the difference.” Or (the best of all) “I have to buy this magazine. My friend Maggie has a piece in it.”