Star Wars Disco has come up in conversation (online and in person) twice in the past week. For those of you who don’t know what Star Wars Disco is, it is exactly what it says it is: a disco remix of John Williams’ score by Meco. It is that moment in time when two 70s juggernauts had a drunken, pop-culture, one-night stand. When something becomes too trendy for its own good. (Click here to get your groove on.) It’s the day your mom borrows your Reeboks and slouch socks to wear with her new Champion sweatshirt, or your great uncle’s new girlfriend friends you on Facebook. 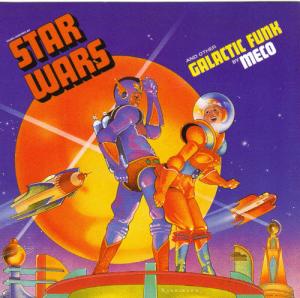 For anyone who is interested in, reads, writes, otherwise thinks about non-fiction, the debate over what is true, what is fact, what is fiction, is inescapable.  For me, the conversation is a little bit like Star Wars Disco. The debate itself is trendy to the point of absurdity. I’ve heard super-smart people argue, with raised voices, about “my truth” and “your truth” and “universal truth.” I’m not saying it doesn’t matter. I’m not saying the debate isn’t important. I’m just saying that I’m kinda over the whole thing. I mean, seriously folks, even Miller Lite has moved on because tastes great and less filling can peacefully coexist. (But watch this anyway and love it.) 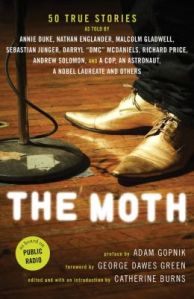 Enter The Moth, a movement dedicated to the power and, yes, truth, of storytelling. I am so, so new to The Moth, but, by sheer stroke of luck, got invited to the Live at the New York Public Library event Illuminating The Night: Stories and Conversation with The Moth. The event included some Moth stories, but also a discussion about story itself. Catherine Burns, Moth’s Artistic Director explained that they “don’t have The New Yorker’s fact checking department” but that all of The Moth stories told in events around the world, on their podcast, and on NPR, are “true” for the storyteller. Andrew Solomon, who not only told a fantastic story about Diana Vreeland and the (in)famous Avedon portrait of Nureyev for Vogue, but also participated in the panel discussion, was adamant that the stories and their telling are bigger and more powerful than being concerned about truth and lies. “Numbers and statistics” he said are facts, but it takes people to tell the stories. The Moth connects people with stories and storytellers and, in doing so, moves towards that “universal truth” that so many get hung up on in the non-fiction/fiction debate.

That’s where the magic lives — in between the what and the how and the who. It lives in the why? and the so what? the what’s next? And I think that magic can be in fiction and non-fiction and everywhere in between.

So, let’s move on. Let’s talk about something else. How about you tell me a story?