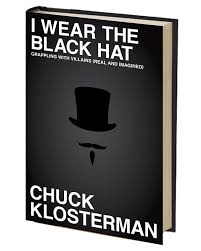 Black Hat is a collection of essays ranging on topics from OJ Simpson and the Oakland Raiders to Machiavelli and Metallica. Klosterman’s premise is that the villains are the ones who know the most but care the least. Klosterman admits that this doesn’t always hold true, but that the idea works on a basic, baseline level for a larger discussion of the appeal of villains and villainy. The collection opens with a quote from Klaus Kinski, “super nihilist”—“One should judge a man mainly from his depravities. Virtues can be faked. Depravities are real.”

Thinking of these two ideas together—supreme knowledge and real depravities—is the ideal blueprint for a building a cinematic super villain. (Thinking of it in the context of real people like Ted Bundy is too chilling for this blustery November morning. You can read Klosterman’s book for that. But I don’t want to go there.) When I say super villain, I talking about people like Dr.No or Megamind. Villains with armies and minions and catastrophic maniacal world-ending plots. Of course, every villain needs a foil, the hero who saves the world. But aren’t the villains more interesting? The fact that they are detached from the social constraints of polite society appeals to the darker corners of our minds. Our collective id is excited and enthralled by the possibility of doing exactly what you want, when you want, and to whom you want. (I am always curious about the funding of the super villain community because a ginormous anti-matter freeze ray can’t come cheap, but those are details and no self-respecting scenery-chewing super villain (except maybe Dr. Evil) is going to be caught up with petty details like credit limits or the guy from MasterCard who keeps calling about suspicious charges on your account at Computer World.)

This weekend I went to see Thor: The Dark World. (Me and a ton of other people adding up to $80 million or so.) And yeah, Thor is a great and powerful hero. And Chris Hemsworth is well, yeah…Chris Hemsworth—abs, biceps, and all. Even the Ninth Doctor makes an appearance as the ultimate antagonist, a dark elf of all things. But the moments in The Dark World that are best, the ones where I felt like I was getting my money’s worth, are the ones with Loki. For anyone who is unfamiliar with the Marvel Universe, such as the people who live under rocks or you know, my mom, Loki is Thor’s brother who has appeared in both the original Thor and last summer’s The Avengers. (In Norse legend, Thor is the god of thunder and lightening. Loki is the god of mischief.) In Thor and The Avengers he was a bad guy unleashing evil-doing alien hordes on New Mexico and New York. He did so with a gleam in his eye and a wicked smile. He is the god of mischief, after all. Here, though, in The Dark World, Loki is more complicated. He is imprisoned in Asgard. He has been neutralized. It is only when Thor needs Loki’s help that we get to see him out in world again, smiling that smile and casting his illusions in true super villain style. 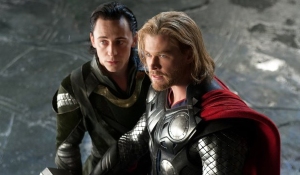 These scenes between Loki and Thor and interesting and funny and sometimes sad. The brothers have long standing trust issues (One of my favorite lines from The Avengers is when Thor scolds Natasha for besmirching the name of an Asgardian and his brother. She reminds Thor that Loki killed 80 people that day. Thor’s response: “He’s adopted.”) Thor knows he can’t really trust Loki, but he also knows that he needs Loki and needs to find something close to trust.

Trust my rage. Classic super villain. But also subtle and powerful. We have seen (No spoilers, don’t worry) Loki knowing the most but caring the least earlier in the movie. We have seen his real depravities in the original Thor and The Avengers. We know Loki has more issues than the newsstand in the train station and a world-class Oedipus complex. Because we have seen these things, we, like Thor, can trust in that rage. It is authentic and nihilistic, a la Kinski. We might not trust Loki to water our plants if we go away for the weekend, but if we need some heavy lifting and some world-ending-type bad-assery, we can trust that he’s up for the task. (Much of the credit for Loki certainly goes to Tom Hiddleston who is amazing and the sort of actor that makes you want to watch just because he’s there.)

Authenticity and emotional honesty are thought to be the exclusive providence of the hero. But sometimes those qualities are just the things that make us watch, draw us in to, the villain. We may not agree with the villain’s choice, but we have some kind of understanding about where those choices come from. We believe in the villain’s own villainy.

Or, it could just be that we all secretly want our own liar deep inside a volcano with an open bar, big screen TVs, and satellite TV.